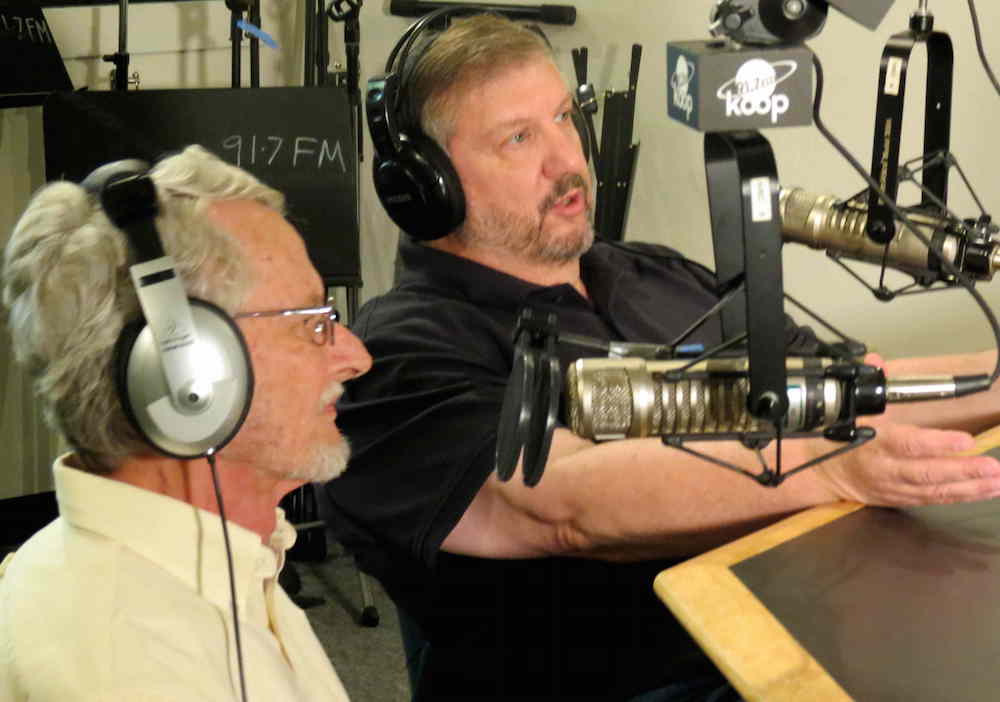 On Rag Radio with Thorne Dreyer, we once again search for extraterrestrial life with preeminent American astronomer Dr. Neal Evans* -- but this time we are joined by anthropologist and religious studies professor Dr. John W. Traphagan.
The quest for extraterrestrial life primarily involves searching for stars that are somewhat similar to ours and planets that might have conditions close to those on Earth. In addition to updating us about the most recent developments on the likelihood of life -- microbial or intelligent -- elsewhere in the universe, Evans and Traphagan also discuss the search for and possible discovery of such life from the additional standpoint of ethics and other disciplines. Evans is one of our most important American astronomers and Traphagan brings a background in political science, anthropology, religious studies, and ethics to the discussion *Dr. Neal Evans and Dr. Cecilia Colomé joined us on Rag Radio, December 12, 2016, to discuss the search for extraterrestrial live. Listen to that show here.
Dr. Neal Evans earned his bachelor's degree and doctorate in physics at the University of California, Berkeley, and did a year and a half of post-doctoral work at Caltech before coming to Texas. Although initially interested in high-energy and particle physics, he shifted his focus to astrophysics and worked with a research group started at Berkeley by Nobel laureate Charles Townes. Evans joined The University of Texas faculty in 1975, where he taught for 40 years, including classes about the search for extraterrestrial life, and a seminar on the origin of the Universe and life. Dr. Evans was the Randall Centennial Professor of Astronomy before becoming an Emeritus Professor in September 2016. Evans has led large groups in programs on both the Spitzer and Herschel space telescopes, studying the formation of stars and planet-forming disks. Evans, who has served as a mentor to younger generations of astronomers, is a recognized pioneer in the study of how stars form in our galaxy -- and how planets form around them.
John W. Traphagan, PhD is Professor of Religious Studies and in the Program in Human Dimensions of Organizations and Mitsubishi Fellow at the University of Texas at Austin. He also holds a visiting professorship at Waseda University in Tokyo, Japan. Dr. Traphagan received his BA in political science from the University of Massachusetts Lowell, MAR in ethics from Yale University, and PhD in anthropology from the University of Pittsburgh. He has also been a National Institutes on Aging postdoctoral fellow at the University of Michigan and a Fulbright Scholar to Japan. Traphagan has published several books, including Science, Culture, and the Search for Life on Other Worlds (Springer, 2016), co-authored several volumes, and has published more than 75 scientific papers as book chapters or in scholarly journals. Traphagan is also a jazz drummer.
Photo above: Dr. Neal Evans and Dr. John Traphagan on Rag Radio at the KOOP studios May 17, 2019. Photo by Roger Baker / Rag Radio. Rag Radio is produced in the studios of KOOP 91.7-FM, an all-volunteer,  cooperatively-run, solar powered community radio station in Austin, Texas, in association with The Rag Blog and the New Journalism Project, a Texas 501(c)(3) nonprofit. It is streamed live on the Internet at KOOP.org and Radio Free America. The host and producer of Rag Radio, Thorne Dreyer, is a prominent Austin-based activist and writer who was a pioneer of the ’60s underground press movement. The show’s engineer and co-producer is Tracey Schulz and the staff photographer is Roger Baker; Suzy Shelor is Rag Radio associate; Alice Embree is guest host; Glenn Smith and Roy Casagranda are our political analysts, and Evan Hearn is the Rag Radio apprentice. The syndicated show is broadcast (and streamed) live Fridays, 2-3 p.m. Central) on KOOP, and is later rebroadcast and streamed on WFTE-FM in Mt. Cobb and Scranton, PA., on Houston Pacifica's KPFT HD-3 90.1, by KKRN, 88.5-FM in Round Mountain,  CA, and at WALHRadio.com in Wilmington, OH -- and as a featured podcast at Veterans Today. Learn more about Rag Radio here.
Running time: 54:52
Contact:  ragradio@koop.org.